Back on the South Downs

For the last few weeks I have had a spell of Singletrackmindedness – repeatedly exploring the myriad of paths in the Surrey Hills, sometimes as a guide (Al, Mart and Patrick at different times) and sometimes solo and tagging along. Anyway, come Saturday morning the land was shrouded in mist with the promise of the Sun breaking through later.

With that in mind I decided to head out to the village of Firle and practice climbing up the South Downs to continue to improve my fitness. I want to be ready for the longer days and longer rides. And boy it seems harder every year now the anticipation of decline is often in the back of my mind as my 59th Birthday looming in the Summer.

I started my ride at the northern foot of the Downs at Firle and took the tarmac road up to the top. The visibility was poor to say the least, and my memory of the road limited, but I was soon at the crossroads with the South Downs Way. From there my plan was to head east to the beacon, turn round and head west, over to and down Itford Hill, to the river, and then just climb back up and head down back to the car park.

By the time I was at the top of the beacon the sun was poking through the mist and I could see the challenge of the Lullington climb in the distance. And that is where I went, following the SDW to just before Alfriston, where I cut off and went down to the Cuckmere River and picked up the Lullington climb. The first section up through the trees was tough – muddy with slippery roots just where you don’t want them.  But I made it with a couple of stops as I lost traction.  Out into the open and climbing on the chalk path, that was drier and had more grip than I had expected, was good.  At the top I veered off the SDW to the edge of the Lullington Nature Reserve before turning west the pick up the SDW again – and what a climb it entailed – ouch.  At the SDW I turned back homeward, this time following the SDW through Alfriston. past Firle to Itford Hill before dropping down to the A27 and picking up a tarmac bike lane back, which was oh so easy compared to  the off-road paths that it felt like cheating. Back at the car I was tempted to climb up to Firle beacon again but time was running out and common sense prevailed. 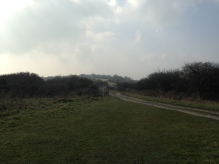 c 20 miles and 2750ft of ascent – the equivalent height gain to cycling to the top of the Burj Khalifa (that is to the top, not the top floor which is only 1918ft up).