Tales of heartbreak – and the vinyl revival 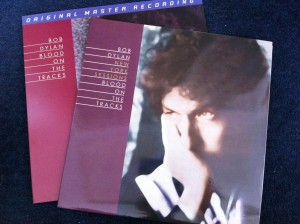 Originally I had expected to be writing more about records (those 12″ black vinyl music discs) than anything else. But I as you may have seen I have been sidetracked.

However a couple of nights ago Charly started looking through some of my records and pulled out the Ben Howard album “Every Kingdom“. After playing side 1 for her I took the opportunity to expose her to some classics starting with a couple of tracks from Bob Dylan’s “Blood On the Tracks”.

Note: While I like the Ben Howard lp (Note: C had persuaded me to go and see him live earlier this year) I was really dissapointed with the pressing quality – there was a high level of  intrusive surface noise that is just not there on so many of today’s modern high quality pressings, and for that matter, many records through the ages.

This is a record I have liked for years but the sound quality never really grabbed me – so when I saw that MFSL/Mo-fi had re-issued it as a part of their Dylan programme I though I would give it a go.

For those who don’t know the album the quality of the songs is just amazing and the record is tinged with heartbreak.   Just listen to the sadness and sorrow of  “If You See Her, Say Hello” or the anger in “Idiot Wind”.

To compare I was able to also listen to an early US original pressing and the  ’80’s Columbia “half-speed mastered” version.  I was also able to add in to the mix a newly aquired unofficial copy of the “New York Sesions, Blood on The Tracks” that had been mentioned in a comment on the “analogplanet” web site.

In summary  Dylan and musicians seemed more alive, real and in my room when playing the mo-fi copy that the two older copies and is my copy of choice.

While the “New York Sessons..” is also recommended – I though the sound quality very good and enjoyed listening to it as much as the mo-fi lp.  I really liked the simplicity of some of the tracks and hearing how songs had developed during recording e.g. “Idiot Wind” moving from sorry to anger as time passed. Please can Mr.D and Sony make this Bootleg Series Vol.12 with “A Tree With Roots/Basement Tapes” as Vol.11.

For in-depth analysis of the songs you can always check out Cinton Heylin’s two massive books on the songs of Bob Dylan.

Like Loading...
This entry was posted in Vinyl Records and tagged Ben Howard, Blood on The Tracks, Bob Dylan, Gramophone record, Music. Bookmark the permalink.

2 Responses to Tales of heartbreak – and the vinyl revival