After a couple of quiet but challenging days on Thursday and Friday I kick started myself on Saturday and chose not to head for the South Downs or Seafront but re-tread a circuit around Haywards Heath I had “made” some years ago.

The route comprises of  a fair number short bridle paths joined with short road sections.  It is not massively exciting (well not really exciting at-all except for the last mile of so of single-track) nor do you get geat views, but it fits nicely as a relatively low-intenstity training circuit and I did disturb a deer. The biggest challenge was the vegetation – on some sections the paths had become so overgrown with brambles I feared I was going to be ripped to shreds – but maybe that is too dramatic as I survived with not too many scratches – on another it was hard to judge the terrain due to the height of the grass – and one was stinging nettle alley. But I did have a smile on my face when I got home.

I have now racked up 400 miles on my MTB in the last 2 months and feel my fittness is improving – climbs seem easier and my perception is my HR is reducing for the same output – and my weight has stabilised. 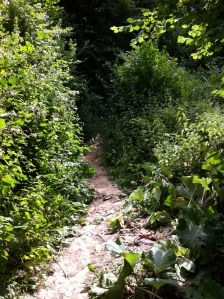 To cap it I hit the beach afterwards – and met up with Charly and Val – and a seagull c**pped on my best faded Skull & Roses T-shirt – divine retribution for I don’t know what.